For security, we have left off part of our email address.
The following email addresses end with @cckslibrary.org

The Clay Center Carnegie Board of Trustees meets
every second Wednesday of the month except August and December, at 4:30 pm
in the library’s Community Room. Meetings are open to the public.

The first efforts toward creating a library in Clay Center were made in 1887 by a group of women called “The Ladies Library Association.”  In 1898 the Ladies Library Club was formed and each member donated a book and solicited books from friends to create a library.  The first home for the library was the basement of the old Garfield School  building.  The living room of the custodian, Frank, and his sister Miss Sue Harkness, became the first library, with Miss Harkness acting as librarian.

In a general city election in April, 1900, the proposition of a city library was voted upon favorably.  A board of directors was appointed by the mayor in 1901 and the library was opened to the public on June 1, 1901 in an upstairs room at 436 Lincoln Street.  Women’s Clubs continued to augment library funds and in 1902 and  a room was secured in the basement of the Court House.  Miss Harkness continued on as librarian and after her resignation, Miss Adelaide Story became the librarian.

During the years from 1902 to 1907, an auxialliary to the Library Club was formed and named “The Branch” to raise funds for a library building.  The Helianthus Club also appointed a special committee to raise money for the building.  A town meeting was held to discuss the possibility of establishing a Carnegie Library.  Mrs. H.W. Underwood, from the Library Club, and Miss Effie Loader, from the Helianthus Club, were chosen to contact the Andrew Carnegie Foundation.  They were encouraged in their application and received a promise of support from the foundation.

In an election on April 6, 1909, the establishment of a Carnegie Library was voted upon favorably.  The present site was chosen and the deed secured by the city. The building and furnishings, excluding the books, cost $12,548.78, and of this Carnegie donated $10,000.  The building was dedicated and opened to the public in 1912.  Miss Nannie Reed was the first librarian and served until 1932.

During those early years, the library occupied the main floor; the upstairs rooms were available for meetings and as auditorium facilities. The south wing became the meeting place for the Library Club.  The Clay Center Men’s Club leased the lower level for a nominal fee until 1974 when the expansion of the library warranted its use as library space.  The main floor of the library was remodeled in 1967.  In 1970 the north wing of the upstairs was furnished  as a children’s library.  It housed an expanding collection and a young people’s classic book collection, a bequest from the Sue V. Hemphill estate. 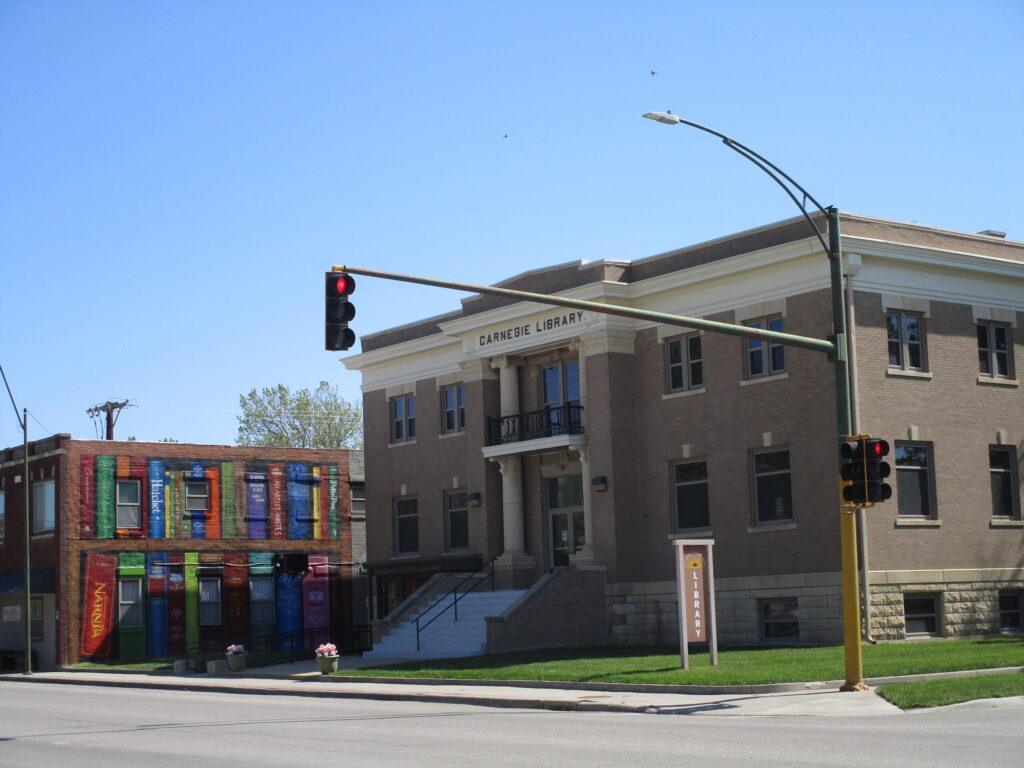 A devastating tornado swept through Clay Center in September of 1973, damaging the library building.  The building was repaired and work had immediately begun on the lower level to create a spacious children’s library and program room.  An all-weather parking lot east of the library was paved in 1976. Disabled persons accessibility was the main thrust of remodeling in 1983.  Both a chair lift and an elevator were installed.  New equipment purchased in 1988 was a personal computer unit which stores the Kansas Library Catalog.  In October of 2000 the children’s library was remodeled.  This included painting the walls, new carpet, and a new arrangement of the shelves, books, and desks. The entire library received a new look in 2012 when all the walls were painted.  In 2013, new carpet was installed throughout the whole building. In the last months of December, new LED lighting was installed on the top floor. In the first few months of 2014, LED lighting was installed in the basement and the main floor.

The Clay Center Carnegie Library is listed on the National Register of Historic Places, a nomination that provides recognition of the community’s historic importance.  The library is also a member of the North Central Kansas Libraries regional system.